Vilcabamba artist, James Birthrong, talks to a difficult bitch about love, drugs and the higher ground on the eve of his latest show, First Harvest, opening this Friday in Ecuador.

The artist smokes. He eats meat if he wants to, gambles, swears, describes himself as try-sexual (“I’ll try anything, twice!”)… and is brave enough to be interviewed by me – notorious in our tiny pueblo as a dangerous bitch.

is stained gold from tobacco. His white hair wild with curls. He wears Hawaiian shirts, emblazoned with exotic flowers, inside of which he tends a garden of pain.

James Birthrong is a difficult interview. He is a man who deserves a book, not an article. In our three hours together he surfs me through a world so rich with gods, adventure, continents, loneliness, agony, sex, delight and ferocity… so many gems he has gathered from a curious life that it is almost impossible now, reading my notes, to know through which jewel to shine the light of this story.

He says, “I am a man who has experienced such agony that the only thing to do was laugh.”

He says, “I am a man who discovered that what really matters, what to shoot for, is contentment. When you give up everything you think you want and go for contentment – then you will get more than you could ever ask for.”

“True love? True love is when somebody really knows you, and loves you anyway,” he says, and laughs – deep and belly-full, in a way he has learned that does not show he is totally bereft of teeth… and almost breaks my heart.

Birthrong agrees to tell me his story of a quest through hell into the tender embrace of the goddess in a week when I am disoriented and vulnerable, tasting again, in this little town, the bitter harvest of bullying and gossip that are the strange fruits of my own journey this year as The Inconvenient Woman in a ferociously upwardly mobile gringo village.

On my way to meet him I passed a new mural on the street, in indigo, that said, Piensa Bonito think beautifully… and I clung to this as I walked the rubble-streets to James’ gallery for the rare and terrifying gift of being trusted with a story.

So.. let’s begin here: in 1971, when Birthrong, at 24, made a deal with himself about whether or not to face his next birthday.

He tells it like this, eyes twinkling; “I was born a cripple and lived a childhood in isolation. I was a child with a broken body; a limp, a deformed hip, a cleft palate and a weird way of speaking.

I was the kid that nobody wanted to be friends with, from a family in serious trouble, in a world writhing in an inhumane reality based on separation and hatred. From very early on I knew what it was to be the freak that took the load of a cruel society.

“From the playground on up we are consumed with a violence of judgment and elitism; separating ourselves into black, white, American, Indian, man, woman, rich, poor, powerful, weak, ugly or beautiful in order to feast our egos on the difference or suffering of others. As the outcast kid I took all that – the hatred and the isolation – and I learned very early that the human experience we have created is very, very sick. It’s like fighting with your own right hand because it’s different to your left – how fucking stupid is all that!” 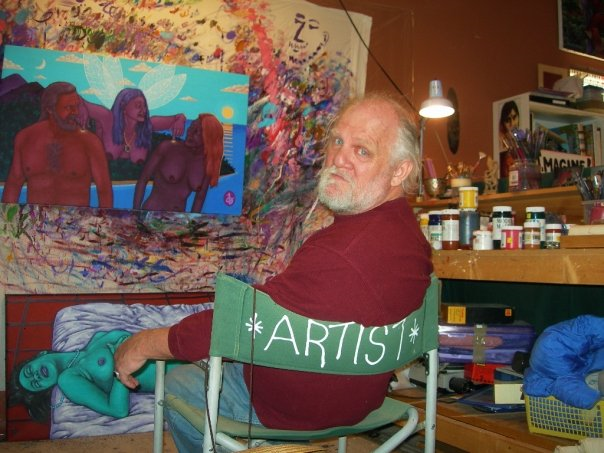 “As the third-grade milk monitor I stood at the little table where I gave out cartons at playtime, watching all the children, and realized I was separate from life, from humanity… it was a wound I lived with all my young life, as an outsider, the object of ridicule, and the subject of severe, continual pain. I felt a deep despair over humanity, the inhumanity of it, and from these early days I had to invent a sort of reality, a meaning to make it worth living.”

His reality included ways to survive the chronic pain of his body which he learned to call ‘sensations’, and can now compartmentalize by experiencing it that way, in parts, without resistance. It included the surf, where he found peace and freedom from the terrestrial realities of ostracism. He was to dive into mythology, travel, LSD, art, erotica, taboo, and the biggest waves Hawaii could throw at him. Years later, he fell, writhing and armed, into the arms of the goddess – but had to suffer more before she would take him to her land of drunken flowers. 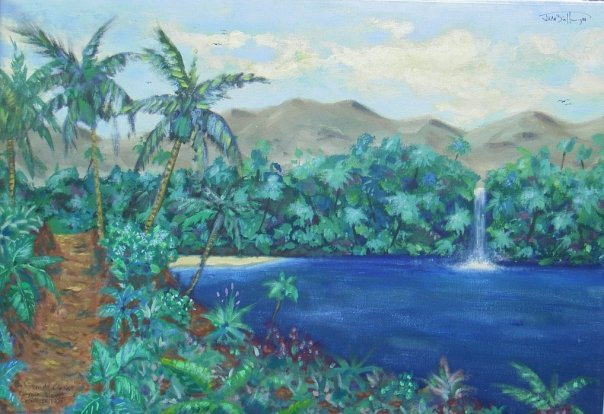 So… on this summer day, James’ private myth hit a wall. Deep in a personal hell, he made the decision to test whether the myth he had woven was strong enough, really, to build a life on.

“I was heavily involved with the acid scene at the time, a kind of LSD guru back then, and I had not one friend, ever.

“My life revolved around depression and loneliness, physical pain and an earnest determination for the life most everybody else just takes for granted. I wanted all that.. the troubles other people knew because they were included in life.

“I knew it was time to find out, for real, if the story I had told to make it all bearable was real – or whether I was just full of sad, deluded shit.”

“I took 21 hits of LSD as a suicide pact to see if I could really live up to my own philosophy. I knew acid only really amplifies things that are haunting our own realities, and I wanted to blow open the doors of my subconscious and face everything there – throw myself at the mercy of who I really was. I knew if I couldn’t face myself fully, then I was a hypocrite and I should just jump.”

So he took himself to a cliff. And he did it.

It was a night he describes as “dramatic”. But the real blessing came as he headed away from his own edge, walking delirious through the streets before dawn, craving a cigarette.

“I was staggering along, perpendicular to a parking lot,” he says, “it was just breaking day, and a lone car pulled up about 50 metres away from me at a stop sign. I desperately wanted a smoke but I was a fucked up hobbling man who had just survived a massive overdose of acid. I didn’t have a lot of energy. I wasn’t looking all that great, and that place was known for freaks and weirdos.

I managed to raise my arm just slightly, to make a gesture at my waist with my smoking fingers into the darkness, to an invisible driver in the distance – the only human soul in all the world. It was impossible! The logical thing, if this guy even saw this movement in the dark, was for him to think, ‘who the fuck is that freak?’”

But that’s not how it turned out. “This man, he got out of the car, he walked all the way over to me, handed me a cigarette, lit it, and said, “You have a nice day.”

.. and the spell, indeed, was broken.

“That was when I knew I had made it,” James says. “That I could live here, be part of it. I could make a life based on my own creativity, my words, my self. It was a small thing, but a magnificent thing: from that moment on I knew, I had the absolute confidence, that there was a place in life for me.”

He falls silent, beaming at me with tears in his eyes, and blows a sideways fountain of Philip Morris into the street. “We’re all really the same,” he whispers, “We’re all absolutely connected.”

On the compassion of strangers, in the surf, in the boudoir and on canvass James Birthrong designed a life and a philosophy that has taken him, he says, lounging his aching body in a plastic chair outside his gallery in Vilcabamba, Ecuador, to the greatest contentment he has ever known.

Six years after completing an immense, hyper-sexy, riotously scandalous and gorgeous body of Tantric work with his partner, Venus and her Lover, Birthrong, depleted and ripe, has re-united with the paintbrush and is preparing his first show of new work, First Harvest this week at his Vilcabamba gallery, Galeria del Mundo.

With his epic series of blush-inducing erotica almost ready for publishing, he has set his brush toward what remains to delight him; flowers, waterfalls, his adoration of his beloved Rebecca, and the pursuit of freedom from darkness.

“Venus and her Lover was a project that compromised everything I stood for as an artist,” he says. “It was a project that was demanded of us because we were somehow qualified to express this work – a service to the Muse, a sort of spiritual assignment.

Through it, and through my love for Rebecca I was stripped of everything I believed about art and knew about men, women, love, desire, sex, limits, religion, life.. everything. And during the final painting, at the end of ten years, I myself, as an expression of the dominant male, of power and masculinity, violence, strength, sexuality and control.. finally learned how to lay down my sword.”

Much of all this he attributes to the lead of his real-life Muse. “Rebecca is the reason for everything,” he says. “She is the expression of female beauty, she has a body to die for, but what I love most, the sexiest thing about her, is her smarts. Intelligence and beauty go so well together – like icing on a cake.”

“We entered relationship when I was 50 – so remember this: sometimes life saves the best ‘til last!” he grins.

Together, James and Rebecca have made a personal quest through travel, mythology, art and poetry, to tear down the veils from human love. They have explored and re-interpreted archetypes from every religion, as well as wounds left in society and in our own bodies from tyranny, violence, genocide, misogyony, religion, war and the lost cosmology of a healthy humanity. Through this quest they invented in their own lives an architecture for love and sensuality beyond the legacy of the violated feminine and a crucifictious male-paradigm based on war, pornography and loneliness.

After that, James never painted again. He thought he never would. But relocating to Vilcabamba after journeys around the world, rest, nourishment and finding a home where he feels ‘some sense of peace’… the new work has emerged, tentative and sweet, from new earth inside him.

The 8 pieces are vivid and intuitive, eclectic and bright. There is a disarmed simplicity about them which belies the gifts of the artist, and a humility which is tribute to what I see in James; an earth-stained and alert, joyful and fire-tempered expression of genuine human courage.

He opens at 5pm on Friday, December the 13th – a date which delights him, in tribute to the magical symbols of the goddess, distorted and perverted by the cloaks of religion.

‘You’re all about the goddess,” I say.
“Obviously!” he quips.
“And I’ve done a lot more than just talk about it, idealise it, or wish for it.
I’ve lived it.
I’ve loved it.
I’ve been crucified and come up adoring her.
I’ve walked the walk into her arms… and it isn’t over yet.”