The Key to Enlightenment

I’ve never been one to ‘buy American’. I don’t go for Macs, Levis, Victoria’s Secret or Oreos. I will admit to contradicting for the sake of The Red Hot Chili Peppers and Annie de Franco, but in the main, no – I don’t ‘buy’ the American thing. Especially when it comes with Very white teeth.

So it’s a genuine mystery then, why I am snuggled up here in my noisy bed (listening to cheap Chinese car alarms fracturing the quantum field all around the frigid night), with rescue-puppy, Princessa, at my feet and a nice cup of purple flowers swooning in a hot tea beside me, waiting to download my Free Key to Evolving Beyond Ego seminar! I am even mildly excited.

The seminar was sent by a friend who loves me, and is…. concerned (I have cleverly deduced this through calm observation of the lavishing of gifts of books and CDs on Anxiety, Diet, Depression, Meditation, Quantum Physics, Intention, Spanish and neuro-chemistry she bestows upon me every time she sees me).

The seminar, arriving free, with all its cookies and spyware as we speak, comes highly recommended by this friend of mine, based on her life experience sorting through all sorts of heavy shit, including surviving and then escaping a violent marriage, bouts of severe depression, several close-call assaults in her home and on the street, and now a ruthless, debilitating illness that has crippled her in her autumn years.

This friend, she always presents her gifts and nudges with a bubble. I mean by that, to help you imagine her, that if we were in a cartoon, she would be the one carrying the party balloon.

And I would be the one fretting over an abandoned animal.

My friend is always smiling and nodding and offering me her full attention. She lavishes me with listening and praise and encouragement. We hang out, not very often, in fact, and there is she – the broken, crooked, pain-struck one, tending to me and feeding me up, and me, I am sort of bewildered by all this attention, and nervous as well… because I have the sneaky feeling that my friend is really on to me.

She says I need to believe in myself more. She says I am amazing and special and powerful and that if I could only just do what’s right for me First, then I wouldn’t be wasting my time having lunch with her. I’d be off doing something….. else. Something like what? I am wondering. What am I supposed to be doing? What would be better than hopelessly, aimlessly, bedraggedly, befuddeldly and sort of desperately slow-spinning around a dead relationship, a stillborn dreamlife in the fucked-up wild, and a world obviously and utterly failing to be The Change we’ve been Liking on facebook?

We chat away like mad about our adventures, our men, whether to have the ceviche or the chocolate mousse, and the apparently plain fact that I need something – could it be the Free Key to Evolving Beyond Ego seminar?

Let me guess: You think not ?

According to some who have judged me recently, this nomadic writing life I have is so darn freakin’ genius that I could be dipped in plastic and sold as Suck That! Barbie. These are mainly folk who have a co-dependent thing going with their alarm clock and a desk job and a car and maybe a spouse and a mortgage and pillows to fluff and leaks to fix and faithful dogs to have had to bury and wonder… is this all worth anything?

They are folks who might feel trapped or worn out or un-glamorous in their steady homes, their ironed shirts, their Ikea home office and worn-in slippers. Who see the same view, more or less, from the windows they wake up to every day, and know where the corkscrew is.

Who are these days watching the elastic on their knickers give out from too much pressure, and have a mild sinking feeling that they are missing the whole show of Life, as they tend their teenagers, or their luke-warm marriages or their portfolios and worm farms.

They are people who think that to be loose in the world, scampering from hither to thither, climbing hill and lolling about in dale, meeting freaks and weirdos is what life was supposed to be about.

They think coffee with a wizard, wine with a reincarnated Knight of the Round Table on a quest to re-instate Camelot, a parting gift from a mad scientist who designs tools to blast toxic sludge from the ether, hanging with a guy who is late for work because he stopped in the park to give stitches to an injured bird and marching through the cornfields with a

brave soul fighting off land-grubbers and criminals to save the sacred wilds of the Andes before a lunch of lentils and cask wine with a renegade Colombian doctor who gave up chemistry when he realized he could heal in moments through a grace sung to him through the spheres… sounds like a pretty good week.

But I’m not so sure.

Maybe it’s overload? But my condition feels, in fact, like underwhelm!

I am underwhelmed with wizards, weirdos, wunderkind and just about anybody on a quest, or inspired by angels, or guided by spirit to save the planet, whisk up an ascension or support humanity as it evolves into the fifth, sixth, seventeenth or any other dimension. I am sick of dimensions. I am sick of reincarnated characters from Camelot. I am sick of car alarms, traffic lights, boozers, do-gooders, locked gates, synthetics, pool pumps, factory farming, resentful kitchen staff, Nescafe, raw food, the meat industry and the constant bickering, opinioning, teaching, shoving, blathering on, bitching-behind-backs, passive aggression and bullying that goes on. I am sick of know-it-all call center people and whipper-snippers.

Even though I am a triple-certified yoga teacher, Tantric practitioner, massage therapist, meditator, surfer, mountaineer and cancer survivor, dog-rescuer and have several orphans, lizards, moths and worms to my karmic credit, I am frazzled by loud car radios, thought today about smashing the windscreen of a sedan that was bleating its horrendous alarm for four hours straight, and became very annoyed when my rescue puppy seemed completely disinterested in the squeaky plastic chicken leg I bought her. 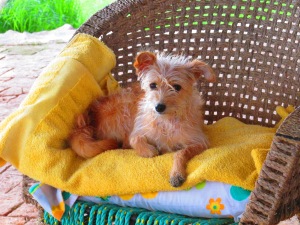 And even though I don’t have insomnia, self-inflicted scars, anorexia or bitten fingernails I think I might still be slightly tense over the guy who held the knife to my throat in January, threatening a murder suicide, and the one who broke into my bedroom at 3am after my birthday to rob me, and the crazy bitch in Vilcabamba who reckons she is on a holy mission to destroy me because I took too long, in her opinion, to leave my boyfriend. Of the constant theft of what clothing, electricals and peace I have left, and the trauma of watching our beloved wilderness get turned into a shitheap, or luxury villas, or a theme park these last two decades.

On the brightside, I am in far better shape than this time two years ago in Ubud when I saw a dead mouse on the road on my way to a business meeting and broke down hysterically at Kafe, in front of all the yogis – tres uncool! – and lost the two friends I had managed to scrape together that year.

However, it is vividly plain to my friend here, and sneakingly possible-ish to me that I may indeed very well need something – and why not a Free Key to Enlightenment seminar?

Even if it comes in American. And features the razzed-up mugshot of a guy with Horribly too-white teeth. Which is, surely… a sign!

No, Jade. It is a HONK from the Universe saying… Doh! YOU! There is nothing good gunna come from this…. There is nothing a guy with a corn cob in his gob, and a photo that heavily photo shopped can tell you that isn’t going to cause you to be persuaded to sign up for some dollar bill. This would be called a marketing strategy. Forget it. Back off. Turn away from the scary man, and get back to staring at the cheap paint in yet another strange bed, pretending to be Transcendentally Meditating. Now. Use the Power of Now, the Force, whatever… do not press play. Do not …

The thing is, I am getting the sticky kinda shameful feeling that a dose of disappointment, let alone outright fury at the general state of things seems like the only really appropriate response. Does this make me a Grinch? I mean, folks… come on! While various camps are still bleating on about how humanity is on the brink of illumination, teetering like angels on the pin-head of Darwin’s wonky pyramid, the evidence is everywhere that, actually… not!

Folks go on and on and on and on about the government, the banks, the illuminati, the patriachy and stuff…. but I see at tables everywhere, in parks, on sidewalks and the sleery cliques we love to boil up all sorts of basic nastiness boiling away among us – the so-called meek! Is that because I am projecting?

I am so weighed down by a sort of limp feeling at the garden variety failure of kindness all over the show that the word enlightenment, as in lighten up, has a real ring for me. But is lightening up similar to looking away? What does it boil down to? Where an it get me, and you and us, since we’re all in this together… no?

I will admit to bouts of the miseries over the last, hmm, incarnation, and I’ve tried everything else, god knows!

I’ve chanted in white gowns and poured milk on the cosmic penis, done fifty kinds of yoga, seen the molecules of ether that are the energy seeds of the universe, fasted, puked, shat in a bucket, ridden the mystic cactus, tangoed with the Vine of the Dead, scraped my tongue, called to Jesus, tee-totalled, drunk the whole case, smoked the whole packet, climbed the Himalaya, the Andes, the stairs to sacred places, rock ledges, waterfalls, icebergs, altars and weird parts of second hand bookstores everywhere… but in general, and in confidence, I can say, I think, that my irritation and impatience with this whole carry-on is actually getting worse.

It’s not that I set out to cure myself of irritability, or depression or anything much really. I set out to escape the too-straight streets of Sydney, the nasty underground politics of ‘a proper job’, gossipy neighbours, that sinking feeling as Sydney turned into a mega-slut-for- cash-real-estate-dollar and crushed all the daisies in her pocket… and to continue my life hobby of falling in love with the wild.

However, at Chapter 44 my condition does not correlate much to what I read in Eat, Pray, Love. And it is not what it says in Light on Yoga. It is not a risk ever mentioned by those who market Galapagos, Bali, Macchu Picchu, Ankor Wat, Antarctica, Vipassana, colonic irrigation or travel as valid investments of time and money… let alone as ways to preserve love for life, or even hope.

According to popular wisdom on the road (which is increasingly Chinese-funded, heavily policed and infested with shiny new 4wds wherever you go) any failure to be happy on the path (previously) less traveled can be put down ego-mania. Plain and simple. If you are failing to find access to God and the ‘it’s all good’ download, then you are clearly a failed lightworker and are contaminated with ego.

So – here we go! Enough ranting on. I am pressing play. Will report in tomorrow.

15 thoughts on “Malice in Underland – Part One”