When the fine art of conjuring the mighty cosmic serpent goes wrong, it takes a Colombian juggler, a bottle of snake juice and a steady needle to sharpen the carnal fang.

Vilcabamba Valley, deepest Ecuador, 2pm under a fierce Andean sun: here we are in the garden. Humming birds whiz about like dabs of oil paint off creation’s fast brush, the daisies are giggling and the chooks are fat.

My landlord, the local shaman, is sucking her teeth and smoking American Spirit, as usual, while her boyfriend, a sexy young Latino, hovers nervously in the shade.

We’re in the Sacred Valley. An ancient and legendary pueblo, once hidden safely in the skirts of these magnificent mountains, but now splayed open by the new Chinese-funded superhighway, and the exploits of a creepy New Zealand real estate broker.

Hordes of expatriating Americans are here, boozing, smoking pot, whining about the government, and aliens and the lack of hi-speed blenders. But in this corner, in the

shaman’s pretty farm with its flower beds, fat Buddha goddess, feather charms and the loving hand of good gardening and common sense there is mostly peace.

Which Pablo is not feeling today.

A Colombian artist has arrived in town. There have been negotiations at the fountain. Pablo has been afflicted for years now by dodgy tattoo artistry. He has borne the shame of carrying a very large, extremely demented-looking snake inked across his back, and failing, in every way, to symbolise the ferocity, drama, power and virility that a shamanic serpent ought.

The snake is one of the four great power animals of South American cosmology, and the iconic image of the psychedelic healing medicine, ayahuasca – the motherload of South America’s profound trove of knowledge of chemistry, psychology, human health, the ecosphere – everything!

Mother Ayahuasca is represented by the powerful cosmic serpent. Through whom all comes into being; the planets and mitochondria, the sickness and the genius, the love and the terror. It is her strong body, and her fangs that deliver her authority – in which areas poor Pablo’s snake is errrr… grievously challenged.

Suffering a total absence of muscle-tone, lazy eye, apparent drunkenness and massive craniofacial trauma, this is evidently not a snake of shamanic proportions. It is not the serpent equal to his fang-toothed, cactus-wrangling hot mumma shaman lover either.

Contrary to the popular thought of this mixed up age, the serpent is not a male symbol, nor a demon archetype, and has very little, in reality, to do with dangling about in trees causing marital trouble. As simple observation easily proves.

Actually, the snake originally, and deeply, belongs to the goddess, to the creation story, to the notion of wholeness, self-reliance, completion, renewal, safety, wisdom and a living, ecstatic cosmos. It is the creative force for Australian Aboriginal cosmology, and the keeper of that realm, as it is in Hawaiian deep ecology, Greek, African, Celt and Pelasgian.

In ayahuasca and san pedro healing traditions the snake is not the symbol of getting ‘shot’ by psychedelic cosmic venom in a scenario of attack and survival through the AK47 of ‘expanded’ consciousness into a ‘beyond’ world full of kooky visions and stuff…  it is the symbol of the grace of the Creatrix, who holds man, woman, life and death in her body and restores peace.

Snake as cosmic dick, seeping poison and treachery, was a late twist in the universal love song for creation added by jealous Babylonian and Hebrew editors.

Which is why Pablo’s worm is sad. And why his hot serpentine lover rolls her eyes and

not her thighs at his otherwise delicious Latino wrappings.

And why the goddess in their garden twitters among the marigolds instead of just tossing off her petals and getting all wild nectar when Pablo’s around.

His tattoo, the symbol of his willingness to stand in his body, surrendered in power, in the whipstorm of adoration, erotica, craving, sadness and grief – the inevitable fields of love for life – is more like a sort of advertisement for compassionate euthanasia.

But the Colombian, a passing juggler and jewelry-maker, can fix all that.

He is a whiz on the ink and a known rehabilitator of dodgy totemic animals. He estimates a total make-over of Pablo’s tattoo will take about four hours, two bottles of snake rum and a packet of rolling tobacco.

“The problem is here, it is in the teeth,” says Miguel as he pulls up a stool, prepares his instruments and swabs the patient. “Yes, the problem, she is these teeth, they are wrong! Total! Completely without the power. And the jaw, this is the jaw of a worm! We have to change the eyes, make them strong and sexy and dangerous. We turn these sticks of teeth into swords of love for the world. Vamos!”

Hummingbirds wiggle their burlesque bottoms, the shaman puts on a pot of stew, Pablo takes a heavy swig of snake juice. As the first cuts are made and the blood begins to 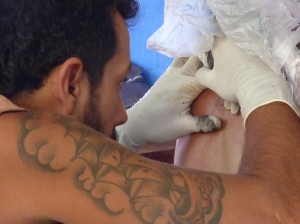 run, one of our party is hastily sent down from the farm for another batch of firewater from the man with the sugarcane press at the bottom of the road.

Snake wine is the ducks guts’ in spirits in the Andes. A burning hot lava of sugarcane alcohol with a sad-looking poisonous snake floating about in the bottom of the bottle. It draws its power from the leeching of venom from the dead thing’s mouth, and just the whole idea, basically.

Pablo is a willing victim to whatever bliss the snake-punch can offer, and as we while away the afternoon on cask wine and flower-gazing, he drifts off into that strange land where pain meets euphoria and they tango off into a psychedelic sunset of hula dancers and absolute trust in fairies, doctors and Colombian jugglers.

As the hours wear on, I am thrilled to report that things do indeed look good for Pablo. There is a transformation occurring. Under the commanding gaze of our Colombian, the worm is certainly turning. What was saggy is rising up urgently. What was blunt is glistening with potencia. What was sideways is absolutely beginning to look us dead in the eye with a terrifying charm.

The fangs, lovingly sharpened, glossed and styled into scythes, bare the golden oil of death, not the drippy goo of Lala Land. Pablo is becoming a man. He is earning his totem, in praise of his goddess. There are hot breezes across the rose bushes and strange light through the eucalypts.

The shaman’s magic stew sends out long fingers of rich fragrance to seduce us in the garden and there are funky Latino beats on the iphone.

I can feel this earth, Andean earth, coming to life all around us and there is that sense – you now the one – when a puzzle is completing, when a tune finds its groove, when the work is done, and it is good. 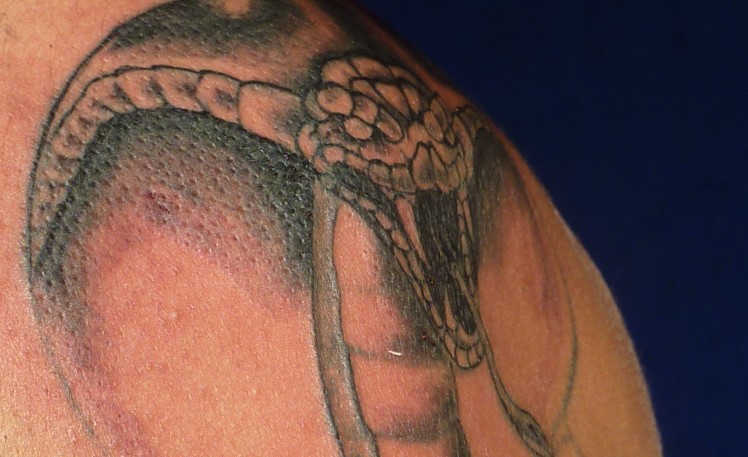